I've received a new MacBook Pro with the M1 chip and I've tried to perform a "factory reset" on it (that is, wipe all user data, and reinstall the operating system to a clean state). This is how it went.

TL;DR -- Before attempting to do anything, update your Big Sur to at least version 11.1. Don't use Disk Utility when removing the partitions; Use the "Erase Mac" function from Recovery assistant instead.

In order to reset the Mac to factory defaults, a reinstallation of the system needs to be performed. This can be done in various ways, booting into Recovery mode and using the "reinstall macOS" option is one of them.

So, I went into the Recovery mode and used this option. Few minutes later, the process failed with a cryptic error: 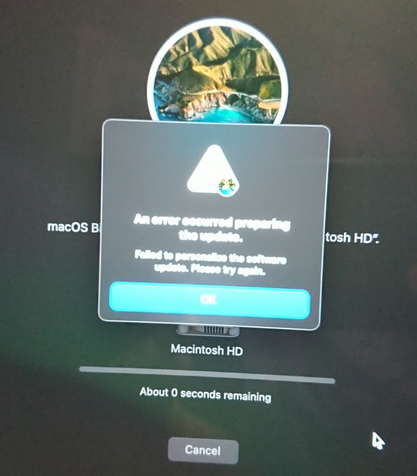 (Apologies for the potato quality of the photos!)

So, since the installer told me to "try again", I've restarted the computer, booted to Recovery once again, and tried to reinstall the system once more time. This resulted in the same error as above, so it was a no-go.

Turned out that some people were successful with the update under Safe Mode. So I've restarted the computer and entered Safe Mode.

Entering Safe Mode is different on M1's. You need to power off the laptop, and then when it's powered off, you need to press the power key button and hold it. After the Boot Chooser will start, select your hard disk, and then press and hold Shift. The button right under the disk will change its caption to Continue in Safe Mode. You can click it (while still holding Shift), so you will boot the system in the Safe Mode. 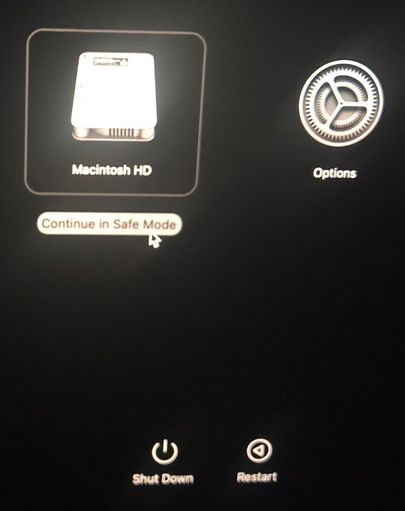 Under Safe Mode, I've scheduled the update. Fortunately, this helped -- the installer has passed the "15 minutes" mark, and it finished without errors. Few reboots later, I was on newest Big Sur version.

So, I've resumed with my original plan. Rebooted to Recovery, issued system reinstallation from there, and it succeeded. But it didn't remove any user settings, because welp, I didn't erase anything.

I went back to the Recovery partition, and used the 'Erase' option in Disk Utility. It succeeded without errors, and I've reinstalled macOS system again.

An hour later, I was finally finished. The system has been removed and reinstalled to a clean state, and the macOS first time setup has popped up. The problem was that during the Account Creation step, I was unable to create any user. I've created a few dummy users, but each time the account creation dialog has been showing me the "can't add user" error, and each error has been predated by a ~10 minute wait. 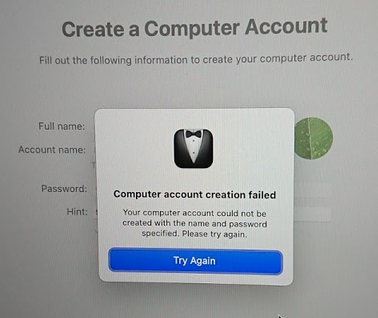 Finally I've decided to restart the laptop and try again.

But the laptop entered the standard login screen instead of the "initial setup" screen. It has remembered all the dummy user's I've created and I could choose the one I'd like to use during login. But macOS didn't accept any password. It also didn't accept my iCloud password when I've tried to use "reset my password using iCloud" -- as it some authorization daemon was not working.

So, I've erased the disk again (using DiskUtil), reinstalled macOS again, tried to create the user again, with different names, different logins and different passwords, but couldn't get past that account creation dialog. I went to DuckDuckGo again and started searching for solutions. 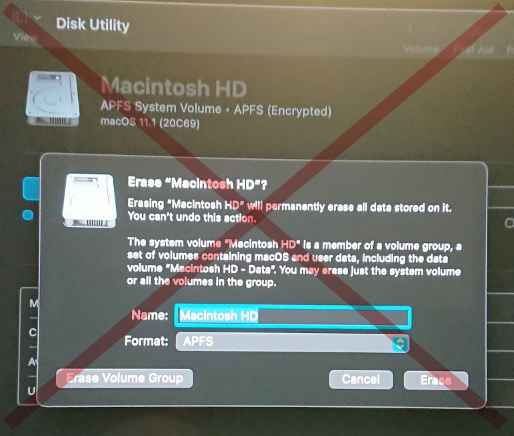 One solution I found was to try to reset the password of currently installed user in the system. So I've booted up the Recovery mode, entered the Terminal, and launched the 'resetpassword' tool. I've tried to reset the passwords of my dummy users, but the password reset tool has been erroring out with "authentication tool request is not supported", or something like that, so it was a dead end as well.

Used DuckDuckGo again. Some people were reporting success when using the "Erase Mac" option of the "resetpassword" tool. So I've restarted the computer into Recovery mode again, entered the Terminal, started "resetpassword" tool, and from the menu, I've selected the "Erase Mac" option. Few clicks later, the tool has started to "erase" the mac, and after the reboot it booted into Recovery mode automatically. Then I could run reinstallation of the system again. 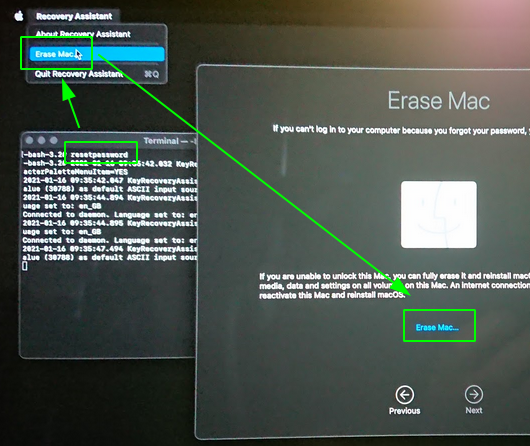 Fortunately, this time I was able to create the user. It still took about 30 seconds for the "account creation tool" to create it, but I haven't encountered any major problems since this time. The system has booted properly, and works pretty well since then.