The main problem is entering the service menu of the device. Only then it's possible to enable the movie playback. The software which knows how to interpret files with movies is already there, we just need to remove (unlock) the protection - which is possible with the help of the service menu.

The hard part is answering the question on how to enter it ;). Different TV models require different methods: beginning with a special key combination on special remote control (used by support workers), by holding the “menu” key both on the remote control and the physical button on the TV, ending with serial cable communication. Unfortunately, my TV from the 5xx series didn't work at all with any of these methods, so I had to find a different solution.

The “building” part is rather over-advertised, and it's a few times more than I actually did, but giving the fact my english sucks big time, it has to do the job.

My remote control is built from three things. First one is an infrared diode, capable of emitting infrared light. I borrowed it from an other old remote control for an old Sanyo VCR. After de-soldering, the diode had its legs long enough to connect them to the cable. 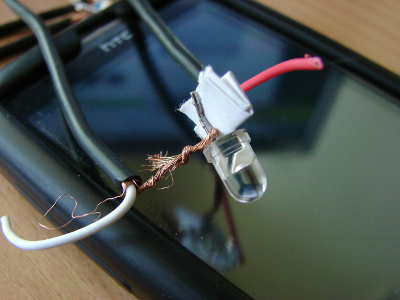 Another thing is a dual-channel cable and a JACK port - both things could be acquired by cutting through an old cable from old earphones that aren't used anymore, and by taking the part with the plug ;). 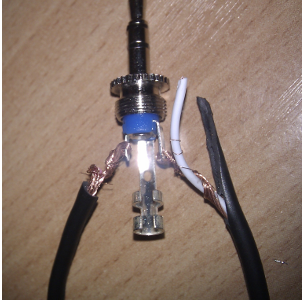 Third part, the most important one, is a laptop with a working earphone port. A smartphone with such port also will work. By writing “earphone port” I'm thinking about a standard JACK port, not mini-jack, not a “bigger jack”, just a standard, the most popular jack port which you can find in the back plate of your average PC. Not every smartphone has a port like that, but it doesn't have to be a smartphone; it can be any device with such port, which is capable of playing music. It can be even your new iPod or an old Walkman :)

Here's my “remote control”, along with the smartphone: 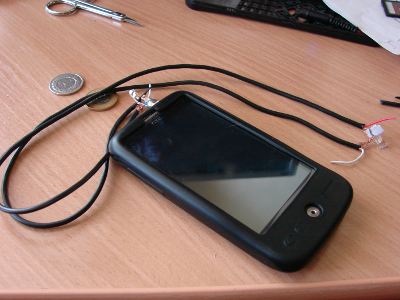 By connecting the remote control to the device, and by playing a specified audio file on the device, we create a situation, where the diode will emit sequences of light in the par with the audio file structure. So it happens that I've found some specially crafted audio files, that could be used to instruct the diode to emit a specified sequence, which will be understandable by the TV. Then, the TV will open up the service menu, because it'll see a familiar flashing sequence.

After putting it all together, you just need to put the diode very closely to the IR receiver port on the TV (because the diode signal will be too weak to be noticeable from distance), and play this audio file (serv-ok-ok.mp3). If it won't work, then you may want to flip the diode and try again. The TV should answer by asking for the password: which should be either 0413 for this model, but you can also try 0000 if it won't work. After that, in the Tool Menu number 3, you'll have the DIVX option, which sould be set to 1. Remember not to touch other options. There are lots of reports on the net from people, who felt brave and decided to “tweak” as much options as possible. This resulted in the loss of sound, or completely brick the TV, rendering it useless in terms of entertainment. Changing the DIVX option from 0 to 1 should be safe - in this model ;).

After exiting the menu with the EXIT button, you can test the movie playback capability without restarting the TV, by plugging in a pendrive, or a mobile hard disk, into TV's USB port. I've checked a 500gb hard disk, and it worked without problems; same thing with 1TB drive.

I'm also going to show a short video, which will demonstrate how to enter the menu, and flip the relevant option from 0 to 1. On this video the option will already be 1, because I've did it before ;). Another thing is that after first test the TV reported an error -- I was using a memory card and an adapter. The card wasn't fully inside the adapter, so the communication apparetly lost a few bytes and the TV didn't know how to interpret this corrupted transmission, but after I fixed that, the communication worked, and as you can see, the movile playback worked as well.

Also, good thing to know is that this model doesn't support the DTS audio, as well as some video formats, but it should handle a standard XviD or h.264 video file, although not sure if Matroshka (.mkv) format is supported. This is a place for your trials, errors and experimentation with ffmpeg.

(the movie is slightly cropped at the top, because the stabilization function of the camera wanted to be too inteligent).

This method should also work on the 32LD550 models, although I haven't tried it personally. Good luck!